I took part in the London Greenwich Park MoRun 10K during November 2014 and thoroughly enjoyed it, labelling it the ‘best way to end a great year of running’. When I saw that this year’s event cost a mere £22, signing up for round two didn’t take much persuasion.

Getting up at 5:58am on a Sunday was a slight struggle, as I had to drive to Sevenoaks train station and catch the 7:18 to Cannon St and change for Greenwich, followed by a 20min walk to the event. Not as complicated as it sounds though and quite a nice journey overall!

This marked the first running event attended alone as I’ve always dragged a boyfriend along for support, acting as my photographer, bag holder and cheerleader. I was surprised at how much I enjoyed being solo. At Greenwich train station I met a fellow runner also heading to the park, and as we were early we decided to go for a quick coffee at Bill’s restaurant en route; he ended up telling me all about his wife, children and his business. We ran together for part of the course and met up at the end to take a commemorative photo. I also got talking to a New Zealand couple and a two Londoners in the queue for free food afterwards (see below!), and we spent some time dissecting the route and discussing running events. I had always assumed that attending events alone would be lonely, but couldn’t have been more wrong! 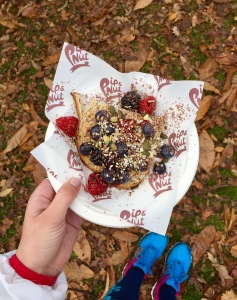 The £22 cost included chip timing, awesome curved moustache medal, branded headband, Volvic water and sachets of peanut butter. ‘Pip & Nut’ had a stall where finishers could pick up free toast: there was a production line of toasters, peanut-butter spreaders and ‘toppers’ – I opted for mixed berries and grated dark chocolate on top of honey cinnamon cashew butter, which was delicious – and very generous!

I had opted to purchase a £10 technical t-shirt at registration which was the perfect fit, and coupled this with a black technical vest underneath, sports bra and Adidas Climate leggings with 1,000 Mile socks and Brooks Glycerin 14 trainers, resulting in a super comfortable outfit. My London Marathon ‘rejection’ jacket came in handy as I wore it to and from the event.

I had eaten a seeded cereal bar, Nakd cocoa bar and banana for breakfast, with a mocha and water: during the course I felt slightly nauseous at one point, which I think was due to sipping too much Lucozade on the way round, but overall felt full of energy and really enjoyed the run. The weather was autumnal – dry, clear, not cold enough to wear gloves; and leaves were falling off trees as we ran. Ideal running conditions, and the park was pituresque with no bottle-neck points or narrow areas. 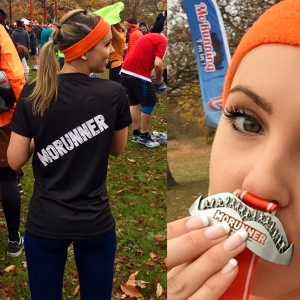 The event was well organised with clear signage, marshals and an energetic warm-up from British Military Fitness. I had to make use of the bagging area which was straightforward; a tag matching my running number was looped around the bag handles and the process took under a minute to both drop off and collect my bag. The starting line was a free-for-all, but with an event of this size there would have been no need for colour-coded timing pens. The 10K route was two scenic laps around the park involving two killer hills (so four in total… argh! So steep!) but the atmosphere was fantastic. There were a number of runners in fancy-dress, and the vast array of moustached-faces was brilliant.

I wouldn’t hesitate to recommend this event to others and hope to take part again in future! 🙂