I took part in the Tunbridge Wells Half Marathon for the first time last year and loved it.

Despite having lived in the town virtually my whole life, the thought of running my local Half Marathon was never – and still isn’t! – exactly appealing. Famed for a challenging route with an ascent of over 300ft thanks to Spring Hill at Fordcombe, the one lap circuit contains numerous other hills and is definitely not the type of course you’d aim to get a Personal Best on.

I detest hills so historically avoided this event like the plague, but enjoyed it so much last year that I thought I’d try it again. Plus of course, it’s a great training run for April’s Brighton Marathon.

I was completely unorganised (read: stupid) and left registration until the day before, when I found that online registration had actually closed. I’d always known that I was going to take part – it was in my race calendar and I was prepared – but with two family holidays back-to-back and changing jobs, I’d forgotten to actually sign up!! D’oh.

Affiliated entry would have been £24 but on-the-day registrations were a pricey £35. I could have kicked myself! Plus, the event usually sells out and on-the-day registrations were limited, so I ended up getting up at the crack of dawn on Sunday 18th February and waiting in the Sports Centre car-park for the doors to open. Luckily I secured a place/running number with an included long-sleeve technical t-shirt, and whizzed back home (up the road, which is handy!) to get ready.

An hour later I was back at Race HQ having consumed a forkful of pasta and a cereal bar (which in hindsight wasn’t enough), and lots of water. I wore my Primark mesh-detailed leggings, Brooks sports bra and the event technical t-shirt with black 1000 Mile trainer socks and Brooks Ghost 7 trainers, resulting in a super comfortable outfit… At first. I had accidentally tumble-dried the sports bra and half-way into the run I started getting backache. It was super tight and digging into both shoulders and my back. Really off-putting and uncomfortable. I’ve had to throw the bra away, which is a shame! 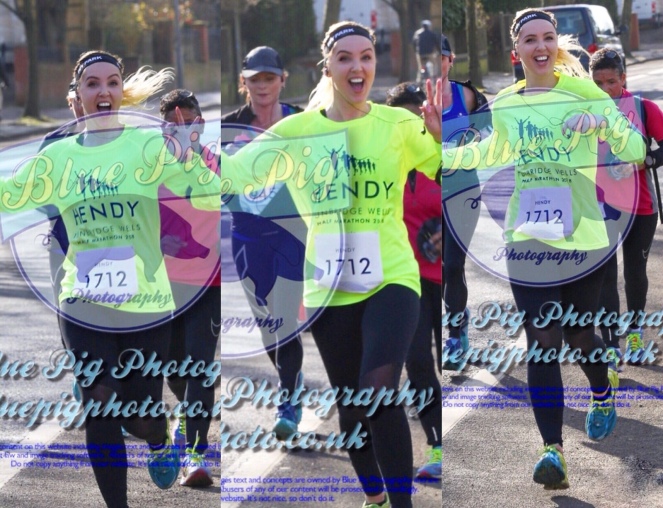 Despite the horrendous hills, the Tunbridge Wells Half Marathon is actually very pretty and takes runners through the countryside and some the cutest villages in Kent. It’s organised by the Harriers running club and has over 1,600 participants. The entry includes the technical running t-shirt, bespoke medal, water, bananas at the finish line, chip timing, portaloos and baggage facilities, which I didn’t need to use.

The weather went from a little chilly and foggy to quite suddenly warm and sunny around mile 7 – perfect running conditions. 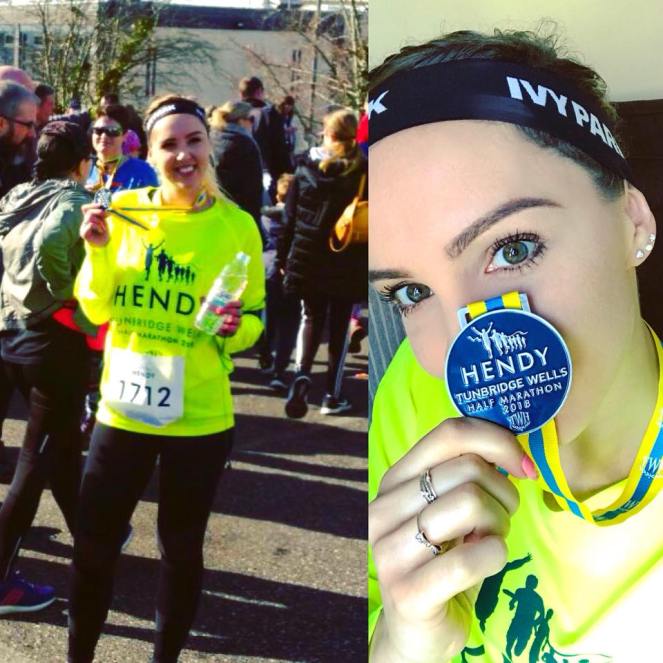 Last year I managed to run up all of the many hills without stopping, but this year for some reason, despite being fitter, I ended up trotting to almost a fast walk at two points, which was frustrating. I opened an energy gel and sipped it slowly during the 300+ft ascent which seemed to have the desired effect and actually tasted quite delicious. I sipped water on the way round and had another gel at mile 10. There were a number of well-marshalled water stations situated throughout the course but I didn’t feel the need to use them.

Overall I did enjoy the Tunbridge Wells Half Marathon, but not as much as last year. Everything ached, it was a struggle and I wondered how on earth I will complete a full marathon in two months’ time.

There is nothing negative to note about any element of this event – the marshals were cheerful and motivating and there were no obvious bottle-necks or frustrations. The course had pockets of lovely spectators who waved signs and handed out Jelly Babies. There was free water and fruit handed out at the finish line and the bespoke medal is chunky, with the option of having it engraved for a small fee right there at the end.

I did get a faster time than last year, but mentally I wasn’t with it for some reason, and was glad to get home. It’s never a good feeling when you have a ‘bad run’; however this is an event I’d definitely recommend to others and I’m glad to have taken part for the second time  🙂