I used to rock-climb as a child and teenager at various Girl Guiding day trips and holidays; firstly as a Brownie, and then as a Young Leader.

We had organised sessions with qualified instructors who bared some of the weight as they hoisted us up the walls with ropes. If we fell, we would just dangle until we regained control and found footing again; or until the instructor slowly lowered the rope to the floor. It was fun and I remember really enjoying it.

I wouldn’t say that I’m scared of heights, but I don’t particularly like them, either; I just love the thrill and adrenaline of being high. Thorpe Park is one of my favourite places – the higher and scarier the ride, the better!

I haven’t rock-climbed since being a teenage Young Leader, and when I heard about a new local rock-climbing and bouldering centre called Chimera, I wasn’t keen. No ropes, support or reassurance? No, thank you! I’ll be honest, the thought terrified me. But, this sport is becoming ‘trendy’ and more and more people are talking about it. Pictures kept popping up on my Instagram newsfeed and I started becoming intrigued. Chimera came up in conversation in the office after a colleague took her children, who loved it. She recommended it and I was starting to slowly come around to the idea. Then, for the 30th birthday in April, my colleagues bought me a session as part of a birthday present. I was actually really happy and excited to try it out.

Weekends were crammed with running events, studying and social plans until Saturday 21st July, when I dragged my friend Will along to Chimera with me. He’d never been before but was also really keen and intrigued. We wore sports gear – I had a Nike dri-fit t-shirt with Nike running bottoms and sports bra – and carried a bottle of water. I showed my voucher at reception, and myself and Will both had to complete a fairly lengthily registration process on iPads, which involved taking a selfie for ID and signing a death waiver (!). We were given special climbing shoes and swapped ‘a key for a key’ for the lockers, which were stationed conveniently between the rock-climbing walls and the toilets and shower room. 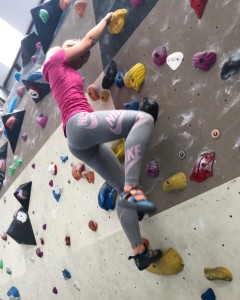 The floor was soft and squishy, and the centre had a few people milling around but wasn’t hugely busy, which was nice. Will and I went to the nearest wall and both began to climb. It wasn’t a particularly high wall, but my first climb in years was terrifying. I was very aware that I didn’t have any ropes or support, and was scared of falling. Will was a bit nervous, too, and after a while we sat down for a moment to have a break. A lovely lady started talking to us and could tell that we were new. She said that the blocks on the walls were colour-coded from easiest to most challenging/competition level, starting with the colour grey. The idea is to climb using just grey coloured blocks. Then, once you’ve mastered all grey blocks in the centre, move on to the next colour up – yellow – and master climbing all of the walls using just yellow bricks.

This suddenly made things much more interesting, fun, and achieveable.  We finally felt as though we knew what we were doing, and set off to complete the grey climbs around the centre. We loved it and there was a lot of laughing – and sweating! I didn’t realise how much of a work-out this would be. Will and I were both sweating and started to really ache after two hours. My hands were sore, and my arms and quads were on fire. We decided to call it a day with the promise of returning. The feeling of completing the climb and reaching the top is addictive! 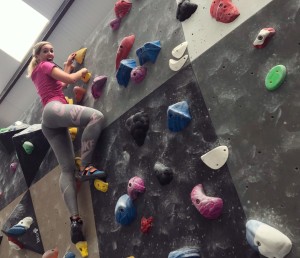 Two days later on the Monday, I was ready to return, and went for an hour after work. This time I was a lot more confident, braver and more determined. I tried new walls and even tried an orange-coloured route. Because I was working harder and faster, and using more strength, an hour was long enough. I could feel that my arms were losing strength, and I was very sweaty and tired – but full of endorphins! With each climb there is a fear of slipping, losing grip and falling; and so each time I am slightly terrified and nervous, yet reaching the top is such a good feeling. Even if I don’t manage to reach the top, I know that I’ve tried and that it will become easier with a few more sessions.

I can see myself attending more and more sessions and becoming a regular climber at Chimera, which is both made and run by climbers. The staff are lovey and helpful, the facilities are brilliant and the sport is addictive. I’d definitely recommend it!