I participated in the London 10K last year and really enjoyed it, despite the 25-28C temperatures.

The entry fee is extortionate at £49.65, especially when the London Marathon entry is only around £35, but it didn’t take much persuasion to sign up for the 2019 event. The event pack arrived in the post a few weeks prior, and contained a race-day guide, running number, safety-pins, and bag-drop bag.

So on Sunday 21st July, I woke at 5:45am and caught a direct train from Tonbridge into London Charing Cross. I walked 10minutes to the bag-drop facility and found my allocated bag-drop tent, before heading to the portaloos. The queues were ridiculous and I waited in one for around 20minutes before realising that there was likely another 20minutes of queuing to go, and I needed to get to my starting pen. I left the toilet queue with a full bladder, and from there it was a 15minute walk to the starting pens, which were clearly labelled and well organised; and were manned by event staff who checked to confirm that runners were in the right waves.

The starting process was arranged so that pens A-D set off in waves, and then pens E-H followed. I was in pen D and crossed the start line a few minutes after the event began; which went quickly as we were continuously walking towards the start line, and there was music playing from speakers with an MC keeping us all entertained. Also, the Start was positioned so that runners u-turned immediately and ran back past all of the pens, which was a nice touch.

I’d eaten a banana and Oat So Simple porridge pot for breakfast, along with a Beanies coffee and apple juice, and made use of all water stations on the course. I never normally use an energy gel for a 10K, but consumed a Torq Cherry Bakewell gel at 7K which gave me a boost when I started to struggle, as I completed an ultra-marathon event just a week ago and am still in recovery mode.

The course, as is typical for a London running event, was lined with supporters/general public and charities, with choirs and drummers providing music at various points – I really like this and find it motivating and atmospheric. The three water stations were well-staffed and included chewy Power Bar sweets and electrolyte drinks, too. The three sprinkler showers en-route were refreshing, especially considering the warm muggy weather, and I found myself looking forward to running through them! The course itself was varied with no bottlenecks, and I enjoyed the route overall.

I felt slow and sluggish but somehow still managed a time of 52minutes, when last year I completed in over an hour, and usually average at around 54-56minutes. I was surprised and happy with that! 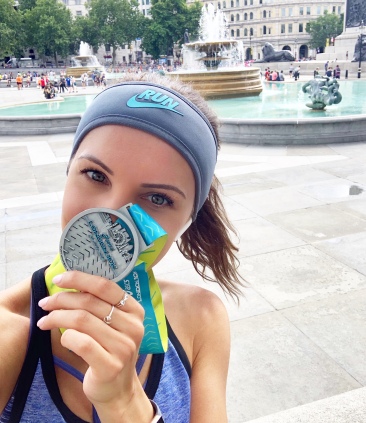 From there, it was a short walk up the road to Trafalgar Square, which was buzzing with activity. There were stands from Asics, Kind and others, with competitions, give-aways and all sorts going on. I headed to the event t-shirt pick up point, which had a huge queue – it was snaking out of Trafalgar Square. I skipped that bit and headed back to the bag-drop location, as I was conscious that I had a train to catch.

Collecting my bag took a while – the staff were enjoying leisurely chats with participants, which is nice and friendly, but again I was conscious of having to get home.

Walking back past the event t-shirt collection, I saw that the queue had somehow grown! I didn’t have any choice but to head for Charing Cross train station.

I enjoyed the run, despite the temperature and feeling slow. However, the organisation of the London 10K wasn’t great this year. There were nowhere near enough toilets, the event t-shirt collection was shocking, and the price was too high. I’ll probably take part again next year, purely out of habit and the fear of missing out, but I’m not sure I would recommend it to others – or get excited about attending again. Hopefully in future I’ll get a Finisher’s t-shirt!