I first heard about the East Peckham 10K when race organisers Nice Work, who I follow on Facebook, posted a sneak-peak photo of the medal.

I was laying on a hot sunny beach in the South of France, enjoying my holiday, when the photo appeared on my newsfeed. Nice Work organize a large number of runs throughout the year, but I had never heard of this event. The bespoke medal was gorgeous and East Peckham is only 20minutes from home, in the direction of my work office, so seemed like a great location. I signed up there and then for just £16.60 (Affiliated), with the race information coming through immediately via email.

So three days later on Sunday 4th August, I drove and parked in East Peckham playing fields. Parking was on the side of the actual field, which worked well as spaces weren’t capped, and there were marshals guiding the parking. A friendly marshal was telling each arrival where to find registration, baggage, toilets and refreshments, which was helpful. I headed over to the registration desk and said my name in exchange for my running number (with embedded timing chip) and safety pins – very quick and easy!

I then made use of the toilets and bag-drop before starting to warm up.

I was wearing a USA Pro sports bra, Tommy Hilfiger vest, USA Pro lycra shorts under Nike Dry-Fit shorts, Nike headband, and black trainer socks with Nike Air Zooms – a solid outfit choice, as the weather was warm and muggy!
I’d consumed a cup of Beanies coffee, apple juice, Oat So Simple porridge pot and a banana; and although I felt good and ready to go, I was also a bit anxious. It happens sometimes before a running event – not always, but sometimes with small local events. It sounds silly, but I worry about coming last!

A man with a megaphone kept everyone updated with timings and instructions, and summoned runners to the start line with a few minutes to go. I positioned myself in the middle of the crowd and got chatting to a friendly lady who was also there on her own, and wished me luck. We set off and my anxiety disappeared quite quickly.

Headphones are strictly banned from the East Peckham 10K, with signs up threatening disqualification, but as per a few similar events this year, I had sneakily hidden AirPods underneath my headband and they were paused, ready to go. However, for the first time in my seven years of running, I managed to complete the whole 6.2miles without turning music on. I was tempted at various points throughout the course, especially when I felt as though I was running alone and when things got tough towards the end, but I found that it wasn’t actually that bad to run without music, and I weirdly quite enjoyed it. The route was scenic and flat throughout the back roads of the village, past beautiful Oast Houses and farms, and cars or bikes would often pass or be sharing the same road. Communication was key as runners from both in front and behind would warn of approaching transport, so that everyone could move over and be aware. I wouldn’t have heard this with music playing. It was definitely a new experience, and one which I wouldn’t mind repeating!

The weather continued to feel muggy and suffocating, with temperatures around the mid-20s. There was only one water station, situated just before 7K, which was tough. I was needing water by 5K, and by 6K I was beginning to think that there wouldn’t be a water station at all. I heard runners both in front and behind me asking marshals were the water was. I ended up consuming a Torq Lemon Drizzle energy gel just to have some fluids, before making use of the water at 7K.

However, I really enjoyed the run and had a super morning. I crossed the finish line in 55mins, slower than my current pace, but that was more than likely due to the heat, and the fact that I’d been on holiday without exercise for a week! 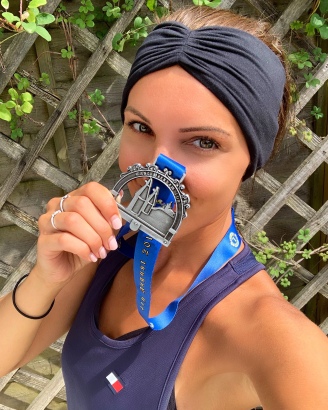 The megaphone man welcomed runners back into the playing fields, and a marshal hung a medal around my neck. There was plenty of water at the finish line, with gummy sweets and Jaffa Cakes! Runners congregated at the finish line chatting and chilling, and there was a nice atmosphere.

It was super quick and easy to collect my baggage before heading back to the car. However I encountered an issue trying to leave – the entrance to the playing field is narrow, one-way, and was accommodating runners coming back into the field to finish, along with cars. I have a Land Rover and caused a runner to have to stop and wait as I had already committed to driving out of the field, on instruction from a marshal who was at the gate trying to control the flow. I felt really bad and guilty! I’m not sure how this could be managed in future – perhaps I’ll park outside the field and walk in. But I would definitely take part in the East Peckham 10K again, and would recommend this event to others, too. Loved it!  😊